Why Does The Punching Fist Rotate 180 Degrees? 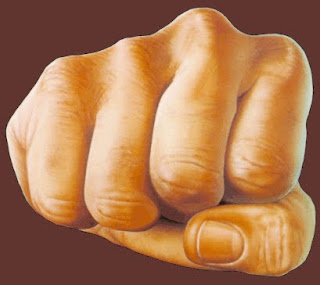 Basic technique teaches us to hold the fists in chamber palm up. As we punch the fist twist 180 degrees with the twist ending in contact with the opponent.

Why? Well I've heard all kinds of bizarre answers: "the twist at the end macerates the skin on impact…" , "the twisting action makes blocking the punch like trying to grab a spinning top" and even "the spin of the fist is a dilution of dim-mak [the delayed death touch] and produces a flu like feeling for days after you are struck with it." The last one is actually my favorite!

In actuality it is much simpler than that. The cocked fist, palm up, remains relaxed as does the arm. Try holding the fist in chamber palm down. Really feels a lot different, doesn't it?

As you execute the punch, the twisting movement allows the arm to remain non-tensed until impact. This increases speed while maintaining anatomical alignment throughout the technique. This process significantly increases the power delivered by the punch. Experiment: Hold the fist cocked in chamber, palm down, and straight punch without twisting. How much power can you generate. Immediately then re-execute the punch correctly. You will immediately notice a tremendous difference in (1) the lack of tension in the arm muscles (before and during execution), (2) the power generated by the technique, and (3) the stability of the arms and shoulder during the punch.

Now, all this being said, what's the point? Simple. . . the most important part of the Matsubayashi-Ryu punching technique is missed by most students, even many yudansha.

When you punch the Makiwara, what anatomical position is the fist on impact with the pad? 90% + will not their fist is palm down, top of the hand parallel to the ground, i.e. the fist has completed it's 180 degree turn upon impact. BAD! That means the majority of the potential force generated by the punch is depleted upon impact. We are striking the MAKIWARA. If we fight like we train this means we will strike OUR OPPONENT.

In reality we should not aim to hit the Makiwara, not the opponent but we should focus on punching through both. We are not trying to hit an opponent in the face instead we should be trying to hit him in the back of his head. Through his face.

Now back to the Makiwara. If you apply the above to Makiwara training it now means at the point of impact the force should NOT be fully rotated 180 degrees. Probably closer to 90 degrees [think of the Isshin-Ryu fist].

"Yeah, but if I hit the Makiwara like that I'll be hitting full force."

Yes you would, But when you strike the Makiwara correctly you learn to control your power and do not strike it with 100% power. This concept was summed up by Motubu Choki in his book "Okinawan Kempo" (1921). He said "It should be noted that a student should be able to control his strength when practicing with a Makiwara. If he uses 80% of his strength to strike a Makiwara, he should maintain 100% of his strength when he pulls his arms back after striking…" The key to rapidity in punching technique is paradoxical; you can punch as fast as you can but still you will increase your speed when you concentrate on pulling the deployed fist back into the ready chamber. FYI: Motubu Hanshi spends most of Chapter 4 describing the proper use of the Makiwara.

Motubu Hanshi had a great influence on Osensei who said in his book "The Essence of Okinawan Karate-do": "There are no karate men who do not use the Makiwara."

Okay, great review of basic technique, but how does that help me in training? Answer: it doesn't if you continue to train the same way you always have. Next time, in practicing punching, try the following.

2) With the slow technique, don't tens the muscles but concentrate on becoming aware of what the punch feels like; in you hand, wrist, arm, shoulder. This is called mindfulness. (Remember Osensei's lecture - "The Fist and Zen As One"?)

3) As you develop this muscle awareness, begin to speed the technique up while maintaining the awareness of your body's movements.

4) Hang up a piece of paper (free hanging) and practice punching it. Extend the mindful practice you are developing in to becoming aware of what it feels like hitting the paper. Do you slow down, hold back, pull your punches?

5) Then hang two pieces of paper, one 6 inches behind the other. Focus on striking the second sheet of paper (behind the first). How does that change the way it feels striking the first sheet?

6) Over time extend the practice to harder objects and finally to the Makiwara. Augment this training with breaking practice.