Can You Use Your Kata With Kumite? 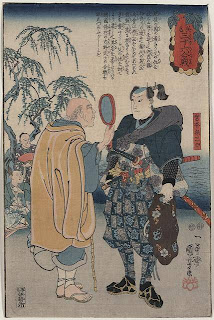 A couple of weeks ago I had the opportunity to attend a seminar focusing on bunkai. The seminar was sponsored by Liberty Karate Club in Orlando and was conducted by Shihan Joche Zapata, 6th dan Matsubayashi-Ryu, 7th dan Matsumura Seito, and 7th Dan Hakutsuru (White Crane).

I'm not one to be impressed by high dan rankings. Too many self promoted "masters" out there and even some who allow their students to actually promote them to high ranks (hachi-dan, ku-dan, etc.). However Shihan Zapata is a student of Hanshi George Alexander whose credentials are well known throughout the martial arts world.

This was a two day seminar. By the second day the pieces started to fit together. I began to see kata movements in a different light: blocks became throws or even chokes. Metaphorically, I had been visualizing the whole dojo just fine (thank you very much) but no one had told me the dojo had another entire room I had never explored!

This was not the limited, traditional bunkai; beginner bunkai, I had been drilled in time and again. It was Matsubayashi-Ryu being taught as CQC (Close Quarter Combat) very different than what I had been practicing up to the seminar.

I began researching to see how valid the concept of CQC was to Matsubayashi-Ryu. I found a reprint of Motubu Choki's book "Ryu-Kyu Kenpo." He talks about always blocking to the upper arm not the forearm. Try it; that’s close quarter combat.

I’m pretty articulate. For me to grasp a concept it has to have a name, a proper name. Calling the applications I was learning “Bunkai” was like calling karate: martial arts. Technically correct but not really accurate.

So if this is not traditional bunkai, what was it? What to call it…

Bunkai is inaccurate. Looking at the word in Japanese it breaks down like this: “Bunkai” depending on the source you read, means “analysis” or "application” most commonly standard bunkai refers to traditional interpretations of what the practical applications to moves in kata are supposed to be. This type of bunkai is rather standardized; i.e. a block is always a block and a punch is always a punch.

A higher degree of bunkai can be referred to as "Oyo Bunkai" which refers to the application of moves in kata in other than the traditional bunkai. More commonly this is used interchangeably with the term “personal” bunkai, or how "I" interpret the applications.

When you break down Oyo Bunkai it translates like this:


Or even more accurately:


It's been suggested perhaps; "Okuden Waza". But Okuden Waza refers to “hidden teachings” applied to “fighting techniques.” None of these techniques are hidden, they're right there you just have to open your eyes and look. Don't just repeat what you were told but go beyond that.

McCarthy (2005) explained it quite nicely when he quoted the renowned Japanese poet Matsuo Basho 松 尾 芭 蕉 [1644-1694] who wrote, “Seek not to follow in the footsteps of the men of old but rather continue to seek out what they sought.”

So evolve, don't simply repeat what your Sensei taught you 20 years ago.

Another way of looking at it is described by Jean Janses (1920) who wrote; “Tradition doesn’t mean preserving someone’s ashes in a box but rather keeping its flame alight.”

When I trained in bunkai I found myself feeling like I was missing something. I had instructors who simply repeated what they had been taught; mindlessly. "This is a block, so create a way you can use it as a block." When I was in the seminar with Shihan Zapate I was struck by what McCarty calls a "BFO" which stands for the "blinding flash of the obvious." This really is a very appropriate phrase.

Continuing I found "Hidden Karate" by Higaki Gennosuke. While he focuses on Shotokan katas, e.g. Heian's, the bunkai is anything but traditional. He combines non-traditional bunkai moves with a focus on close quarters combat. Good text but he still answers the question for you; so his answer not yours (mine).

Shihan Zapata answers the question "his" way but encourages you to find "your" way. He says "My approach works for me, you need to find what approach, what applications work for you." In teaching non-traditional bunkai he does not solely teach the moves but tries to get you to start looking at the katas differently and develop the applications you "feel" in the kata. He takes "sport karate" and returns it to true combat karate roots.

As a Counselor Educator I can understand the process. In counseling you frequently have to return to the past to see where you deviated from your path and get back on the road you were on in order to move ahead. In karate we need to go back in time to advance into the future of the art. The future of karate lies in the past.

So back to original question; what to call it? Probably Oyo Bunkai is the best choice of phraseology, but that's just me: as always T.F.Y.Q.A.!

Patrick McCarthy. (2005). Sometimes you don’t know how to fit in until you break out, (retrieved from: http://www.koryu-uchinadi.org/KU_HAPV.pdf)

Posted by Cox Hakase at 8:52 PM No comments: Links to this post 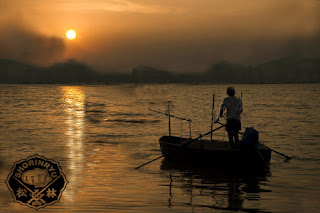 There's an old Buddhist story about a fisherman who one night decided to take advantage of the beautiful early fall weather and took his boat out onto the river to float around and simply enjoy the serenity.

He anchored his boat and lay back in it and relaxed simply staring at the thousands of stars in the sky above.

As he enjoyed the evening, out of the corner of his eyes, he noticed another boat up the river in the distance. “Ahh” he thought “another boater out enjoying the night”.

A half hour later he noticed the boat was moving closer. Wondering who might be in the boat he pondered it for a moment or two and then drifted off, lost in his thoughts.

Fifteen minutes later he became aware the second boat was now much closer and seemed to be on a course aimed directly at him.

In the dusk, he stood up and waved at the oncoming boater but there was no response.

His shouts were drowned out by the crashing of timbers as the oncoming boat slammed into his, throwing him into the water.

Pulling himself out of the water and back into his damaged boat, he angrily climbed over the side of the traumatically merged vessels to take out his anger on the inconsiderate captain of the other boat.

Once on the other boat, to his amazement, their were neither a captain or a crew.

As the absurdity of his actions sunk in, the fisherman began to chuckle. His giggle quickly morphed into a full body belly laugh. Tears of relief and embarrassment filled his eyes. He had been screaming at an empty boat!

The story serves as a metaphor for anger and frustration in our lives. When we scream and yell at the idiot who cuts us off on the Interstate or the corner store, we are yelling at an empty boat. The driver we are so angry at most often is oblivious of our presence. They do not hear our rants, or screams. An hour later they remain unaware of our very existence and yet an hour later our anger continues to haunt us. We're still pissed, we wish we had done this or that, or took a picture, or got up close to their bumper and taught them a lesson. Any one of which would have served only to reinforce our own anger.

The other person is an "empty boat" not because they're stupid or a bad driver or insensitive but because yelling at them, getting angry at them serves no purpose fro use other than we make ourselves mad and suffer the consequences of "our actions". Our screaming does nothing to the "empty boat".

In Karate we have a responsibility to improve ourselves; physically, spiritually and emotionally. Many times that "emotional improvement" refers to the difficult job of recognizing our emotional responses and being willing to accept our own responsibility in managing our feelings. It's hard to subscribe to "Karate ne sente nashi" when we are unable or unwilling to manage our own feelings. That's what growing up, maturing and achieving wisdom is all about.

When we get angry are out; spouse, children, pets, boss, etc., we are again yelling at an empty boats. In every case we serve only to anger ourselves. We make ourselves angry and most of the time the empty boats go on their way oblivious of our anger.

So the challenge is clear: Can YOU stop yelling at empty boats?

Buddhist folk tale adapted from the book
“Don’t Bite the Hook: Finding Freedom from Anger”
by Pema Chodron
Posted by Cox Hakase at 9:14 PM No comments: