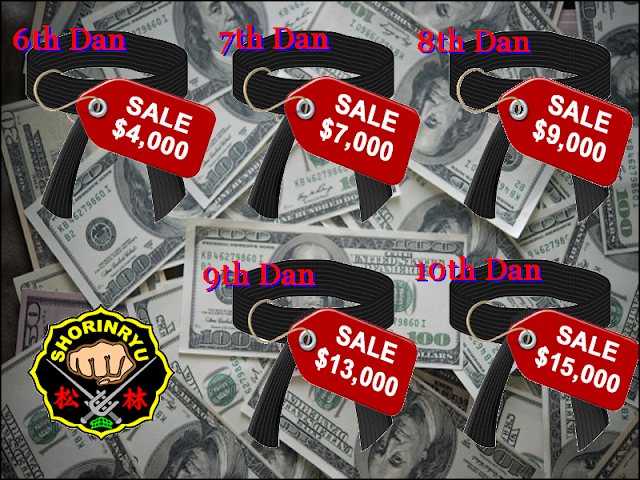 I recently had a very interesting, albeit unusual, experience. An acquaintance basically asked if I would "sell" him a shodan and nidan rank (with certificates). In addition to the rank, I would have to agree to serve as a reference as to their martial arts prowess including serving as a job reference. (The job he was applying for required a martial arts background/competence.)

The rank would have to have been backdated to 2005. The idea was even floated for me to misrepresent myself as a rokudan and award him a godan ranking. This also involved changing the website to reflect my various, but non-existent, "promotions".

I will say the amount of money discussed was significant.

As a background to all this, my wife and I would really to move to Roan Mountain, Tennessee, so the timing of the offer was interesting.

Many people believe if you have "Dr" in front of your name you are rowing in money. Let me assure you, as a teacher, nothing could be further from the truth. In point of fact, I make far less with a Doctorate than I did as a nurse with an Associate's degree. (plus still paying school loans).

So, the proffered money would have been very welcome and timely.

I am happy to say I never once seriously considered the offer. I do not think I could have lived with myself if I had.

I discussed the offer with him in great detail, specifically why it was so wrong and why I could not, would not agree to it.

At the end of a long drawn-out discussion, he agreed the whole idea was extremely inappropriate and he thanked me for refusing. However, he then asked that I not tell anyone which makes me suspect he will simply approach someone else. I suspect out-of-state, with the same, or similar, deal.

So what's the point of this page out of my life? It's back to basics, again. Karate is more than kata, sparing, respecting your peers, your Sensei, your style, etc. The values we learn in karate apply to our lives, not just the time we spend in the dojo.

Rank is a reflection of one's dedication. Not just to karate but to the spirit of the art, the spirit of budo itself. I think we could go so far as to say: "There is no "I" in karate".

Selling rank is prostitution of the worse sort. The seller of rank is not just shaming themselves. They are representing, and shaming, everyone who trained before them.

It's even more complicated than that. You can actually sell rank to yourself; the process is called self-promotion. However, the price for self-promotion is your own dignity and your sense of self-worth. Of course, if you suffer from Antisocial Personality Disorder (or merely antisocial leanings), it's sort of a moot point. I cannot imagine buying rank and then sincerely feeling "I deserved that!". That's like the people who purchase graduate and doctorate degrees, Then again, that's me. I guess not everyone feels that way.

So, bottom line: no easy money. I guess I'll go back to filling out my VA Home Loan application.

I wonder if "GoFundMe" would work????